Edwin Dee & Inez Olpin founded Pleasant Grove's Olpin Family Mortuary in the late 1800's. Edwin was one of three men in the Utah Valley, including Walter Wheeler of Springville, Utah, to be educated in the Art of Mortuary Science.

In 1943, just after Elwood Sundberg married Lewis & Margaret's daughter, LuJean, they too decided to join the family business and Elwood became a Licensed Funeral Director.

In 1946, on a dirt road in Orem, also known as State Street, Olpin-Sundberg Mortuary was completed and began serving the community. It was the first full-service funeral home in Orem. 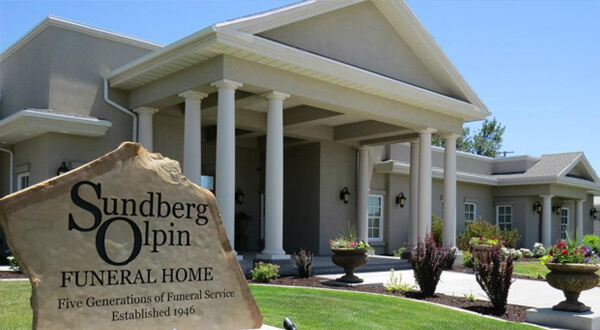 Personal service, integrity, and attention to details are the values established over 100 years ago at both Sundberg-Olpin Mortuary businesses.

The families we serve are of the utmost importance to us, helping to make life’s transitions peaceful and meaningful, Because Last Impressions Count.

In 2016, Wheeler Mortuary, established in 1888 by the above mentioned Walter Wheeler of Springville, Utah, merged with Sundberg-Olpin Mortuary. Paul Wheeler, also a fourth generation Licensed Funeral Director, with his wife, Vicki, now own and operate three facilities located in Orem, Springville, & Mapleton.

a 2,000 sq-ft funeral home has grown to a 27,000 sq-ft state of the art mortuary, now with two additional facilities located in Springville & Mapleton ~

A year of daily grief support

Our support in your time of need does not end after the funeral services.  Enter your email below to receive a grief support message from us each day for a year.  You can unsubscribe at any time.