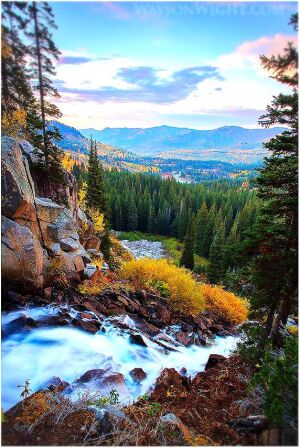 George Eric Nielsen, 59, passed away in his Orem home on April 28th, 2022. George was born on October 2, 1963, in Orem, UT to Mel Jarvis Whiting Nielsen & Max George Nielsen. He was the youngest of Mel and Max’s five children.

In his youth, George (better known in those days as Eric) enjoyed the orchards and canals of his hometown. He and his friends were no strangers to fun & mischief. George participated in various sports: soccer, football, baseball, and bike racing. Though he would deny it, he sang in his school's boys choir for a season. George was the class clown, which often led to him getting in trouble; he didn’t mind being reprimanded as long as he got a laugh out of classmates. As he grew, he maintained most of his childhood friendships and interests, and continually expanded them. He became a regular hunter & and an avid fly fisherman. His other hobbies included shooting, gardening, cooking, and researching, in depth, native american, war, and biblical/LDS church history. George enjoyed classic rock and had a beautiful compact disc collection to prove it. He was loved in every position he held as a coach, youth teacher, or scout leader. He loved to share stories, which captured the attention of anyone in earshot. George was a very naturally gifted handy man, and honed those skills into a self made career of plumbing.

George faced many physical and mental ailments in his life, including, but not limited to, a brain tumor that left him legally blind, a knee replacement, and type two diabetes. Despite his hardships, one of his crowning features was the ability to make himself and others laugh. From dad jokes, to puns, to explicit aviary hand gestures, to fart machines, to exaggerated tales, George consistently aimed to find humor in each day. George was to laughter what a bee is to pollen; a collector and redistributor. He also had a talent of befriending those in need; he brought them entertainment, joy, and the feeling of acceptance.

Funeral services will be held in George’s memory on Friday, May 6, 2022 at 4pm at George’s LDS ward chapel located at 641 South 400 E, Orem, Utah. There will be a receiving line consisting of George’s close family & for friends prior to the funeral, beginning at 3pm.

Send a Meaningful Gift or Donation